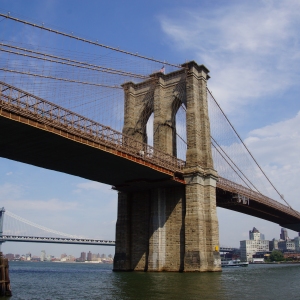 The historic Brooklyn Bridge, connecting Manhattan to Brooklyn over the East River, is by far one of the most recognizable monuments in all of New York City. Measuring in at over 3,460 feet this suspension bridge is considered to be a brilliant feat of 19th century engineering and its easy to see why. The Brooklyn Bridge was the first suspension bridge to use reinforced steel for the bridges cable wire, while at the same time relying on a highly dangerous underwater device, the caisson, to help explode hazardous rock outcroppings found beneath the East Rivers surface. The resulting monument was stable and secure, capable of helping millions of people travel from Manhattan to Brooklyn in no time. Today the Brooklyn Bridge continues to rein supreme as one of the busiest bridges in NYC, as thousands of New York City car rentals cross the bridge each day.

Before the Brooklyn Bridge was completed in 1883 it was plagued with a variety of problems, the worst of which occurred before the bridge had even begun construction! The chief engineer in charge of the Brooklyn Bridge project, John A. Roebling, died of tetanus while the Brooklyn Bridge was still in its planning stages, causing dramatic setbacks. Thankfully Roeblings son, Washington A. Roebling, took over where is father left off; completing the plans for what would become the worlds largest suspension bridge. Three years after taking over the Brooklyn Bridge Project, Washington developed a serious illness called Caissons disease. This crippling sickness, known today as the bends forced a bedridden Washington to watch his masterpiece grown from home with the aid of a telescope! Washington often dictated instructions to his wife Emily, who would then pass them on to the workers outside. Building the Brooklyn Bridge also proved to be difficult thanks to rocky outcrops still visible in the East River of today. Two caissons were ruined due to fire and explosion, while one of the massive steel cables snapped apart, crashing into the river, killing many workers. Despite continual setbacks and seemingly bad luck, the Brooklyn Bridge was completed remarkably quickly, taking just 14 years to build. Since 1883 the Brooklyn Bridge has stood as a part of the NYC horizon, thanks to the dreams and expert designs of two innovative men.

If youre planning to travel between Manhattan and Brooklyn during your stay in the Big Apple, AAMCAR Discount Car Rentals suggest taking your New York City car rental across the historic Brooklyn Bridge. There is no toll to use the Brooklyn Bridge, making it one of the most popular links between two of New Yorks largest boroughs. Over 144,000 vehicles cross the Brooklyn Bridge each and every day, making it the second busiest bridge in all of NYC. If youre planning to take your New York car rental across the bridge during rush hours, be sure to leave a little early. Traffic can get pretty congested on the Brooklyn Bridge so plan accordingly. Other links between Brooklyn and Manhattan include Brooklyn Battery Tunnel, Manhattan Bridge and the Williamsburg Bridge. All three bridges are toll-free, while the tunnel crossing will cost you $3.50 each way.