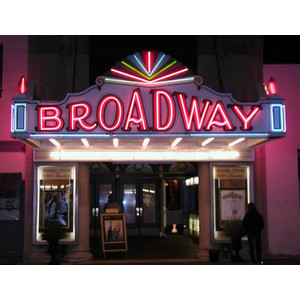 The Theatre has always been a major part of New York tradition; a memorable night is practically guaranteed! Whether you’re planning on heading to an on-Broadway smash, or an off-Broadway independent production, there will always be something suiting your tastes playing on or off Broadway. Just drive your New York rental car over to Times Square’s Theatre District to take in one of the performances! You can choose from comedies, tragedies, musicals, opera and so much more!

A Brief History of Broadway

The first smash theatre built in the New York area was the Park Theatre at City Hall in 1810. The Park Theatre retained full reign over NYC for approximately 10 years until the Bowery Theatre was opened in 1921. These theatres offered a rich line up of shows, but not much variety; all of the productions had a rich Victorian air due to the surge in immigration from European countries to US soil. Tragically the original New York theatre, the Park, was burnt down in the mid to late 1800’s, but the property didn’t sit idol very long. Two brothers purchased the land and rebuilt the theatre, renaming it the Madison Square Theater. This theatre was like no other at the time because of its dual stage feature – the stages were controlled by elevator mechanics and could easily be moved!

The Madison Square theatre was soon known world wide for its revolutionary stage, and it wasn’t long before mechanical dual stages were installed in more and more theatre houses worldwide. In 1891 Madison Square theatre became famous again, this time for installing the first flashing marquee over the boulevard as a way of attracting people to the building. Theatre had finally made it mainstream, with all the glitz and glam of Haollywood! At the turn of the twentieth century more than 16 theatres had been built in what is now the Times Square Theatre District, also know as Broadway. Burlesque acts were also flourishing, marrying theatre with flashy dancing and erotic behavior. The early 1900’s saw over 70 plays performed in New York City, plus a growing popularity in the burlesque sector. The Broadway of today was taking shape!

Today’s Broadway offers none stop entertainment, encompassing multiple genres. When driving through the Theater District in your New York rental car signs advertise everything from the Muppets to musicals, horrors and tearjerkers. Many of the older theatres have kept their original 1920s name but have been replaced with newer, state-or-the-art buildings like Studio 54 and the Majestic.

New York is also home to Off-Broadway theatrical houses. These theatres often house post-Broadway tours of your favorite show so be sure to spin by in your New York car rental to check out the line-ups. Off-Broadway has also been known to launch an unknown independent theatrical piece into Broadway stardom, so be sure to check out some of the locally produced shows! Popular Off Broadway hits include the Little Shop of Horrors, Nunsense, and Bring in Da’ Noise, Bring in Da’ Funk.

Tickets for On and Off Broadway shows can be purchased online at websites like www.broadway.com, www.ticketcity.com and www.gotickets.com. Or you can drive your New York car rental to the theatres box-office. For more information on the shows playing during your next trip to NYC visit the official source for Broadway information at www.ibdb.com. AAMCAR encourages you to take part in this truly New York experience, because a night on Broadway is something that you’ll never forget!