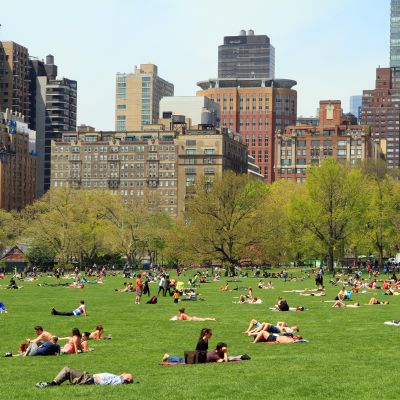 Central Park was the first ever landscaped public park in the United States. It was modeled after the lush public grounds of Paris and London in order to create an internationally recognizable monument. For years it has offered an attractive setting for carriage rides, and tourists providing a place for outside activity. In 1853 stat legislature authorized the Central Park project acquiring an eminent amount of land – over 800 acres, in the center of Manhattan.

The Park landscaper was chosen through a contest in 1857 by the Park’s Commission in the US’s first competition of the kind. The winners were a Fredrick Law Olmsted and a Calvert Vaux, whom had submitted the “Greensward Plan”. There plan was to create a pastoral landscape that would capture the English romantic ideals. It consisted of over 40 bridges and miles upon miles of pedestrian and carriage trails.

Today Central Park is one of New York’s top tourist attractions; from weddings and birthdays, to school field trips and simple afternoon works. The Park is 843 acres big and can be cut into 4 segments: the South End, Great Lawn, The Reservoir and the North End. The entire park is covered with scenic roadways perfect for taking a cruise in your New York car rental. Central Park is also full of statues, playgrounds, fountains, recreation centers and so much more! The numerous parks and trails are popular with dog walkers, roller bladders, joggers and bikers alike, so park that New York car rental and get active!

There are over 58 miles of paths within the park and over 12 miles of Drives around the park for built specifically for your car rental. New York City understands how important Central Park is not only to the tourists, but also to the New York natives, therefore there are over 136 acres of woodlands, 250 acres of lawns and 7 bodies of water that cover 150 acres. There are also 21 separate playgrounds perfect for young (and young at heart) travelers, 7 ornamental fountains and 125 drinking fountains. Feelings a little tired? Why not sit down on one of the 8,968 benches! Feeling a little sweaty, but think its too hot to walk back to your New York rental car? No worries, Central Park is full of beaches and public pool open throughout the summer months.

Central Park is visited by over 25 million people a year and is home to numerous festivals and events throughout the year. There are also many restaurants and food vendors throughout the park, just in case you forgot to pack a picnic in your New York car rental. Central Park is just one of the parks in the City that constitutes the largest outdoors museum in the United States. The parks in New York consist of some 300 sculptures and 1,700 monuments. There are also triumphal arches throughout the park of various sizes, which honor the people and events that helped to shape New York City, the United States and even the international community.

Central Park also offers various permits for sports teams, vendors and wedding ceremonies. What could be more romantic than a carriage ride through Central Park on your wedding day?

For more information on all of the events happening in Central Park right now, visit the Central Park’s official website at www.centralparknyc.org/home. This page as extensive information on the past and present Central Park, important rules and regulations for using the park and much, much more!