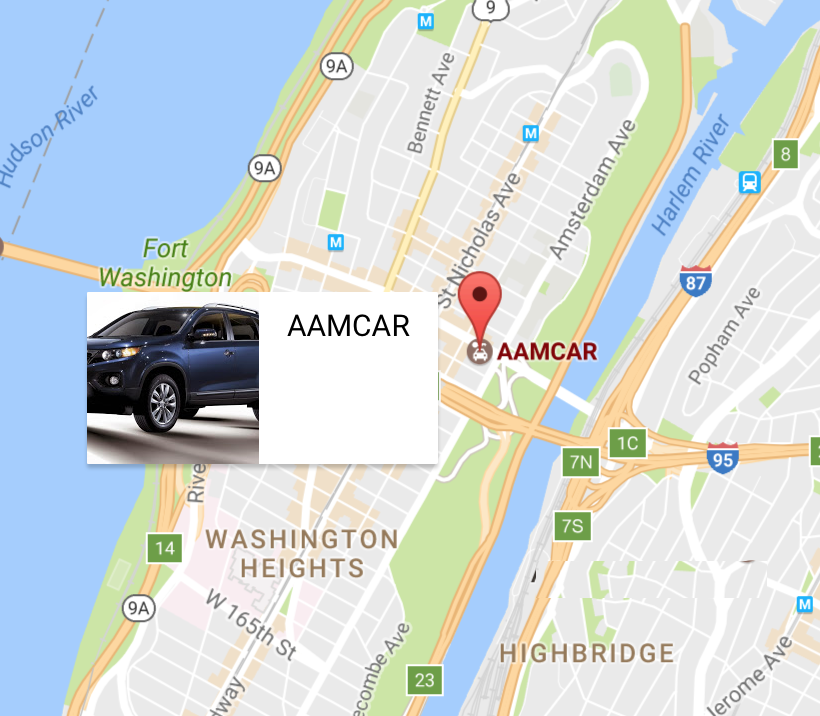 Washington Heights, one of the most diverse neighborhoods of NYC was virtually unknown to tourists until recently.  Now that MTV has a show called Washington Heights, interest in the neighborhood has surged.  I have been living in NYC for over 10 years and have never really gone that far Uptown.  So last weekend, on a bright and sunny Saturday we decided to tour “The Heights”.  We decided to rent a small car but were unable to find acceptable rates.  We searched online for keywords such as discount Washington Heights car rental, cheap car rental and found a branch of AAMCAR called Uptown car rental right in the middle of the Heights neighborhood.  After checking for deals AAMCAR has posted online, I was able to rent a car for the day for $90!  My friend and I decided that spending $45 each made sense because we could do things at our own pace without having to worry about train and bus schedules. The garage was open for 24-hour drop offs which made things a lot easier as I didn’t want to be saddled with the car overnight.

We started our day by going to America’s only museum dedicated exclusively to medieval art, The Cloisters.  It is located in the beautiful setting of Fort Tyron Park which was gorgeous with some snow left over from the previous weekend.  After hiking through the park, we were both famished.  Next stop was Patacon Pisao for some yummy Venezuelan food.  The huge portions of delicious food left us well satisfied.  My friend then wanted to go shopping.  We had heard about the plethora of vendors selling everything from children’s clothing to refrigerators in La Plaza de Las Americas so we decided to head there.  It was sold as described.  An array of businesses selling so many different things!  It truly boggled our minds.

We decided to drop off the car after this and then go out.  When I returned the vehicle, the transaction was smooth and there were no additional charges.  There was a Shell gas station right next door so I was able to fill up the gas without any issues.  Overall, both of us were glad that we decided to rent a car to explore the Heights because the park is not very close to the subway station and we didn’t want to waste time waiting for buses or spending ridiculous amounts of money on the gypsy cabs.