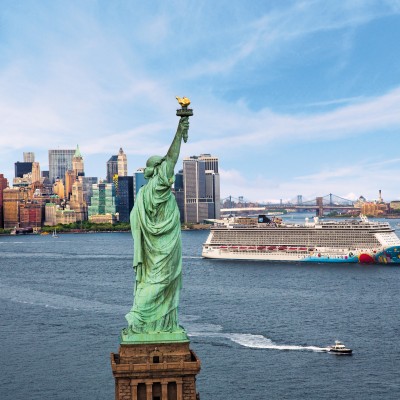 The Statue of Liberty is one of the most monumental symbols of freedom in the United States of America. Located on the 12 acre Liberty Island in the beautiful New York Harbor, the Statue of Liberty was a gift of friendship from the people of France. This attraction is perfect for tourists of all ages, nationalities and race. Whether your visit is educational based or simply for pleasure; seeing the Statue of Liberty is often a once-in-a-lifetime opportunity that you simply cannot ignore! So jump into that New York car rental and don’t forget the camera! This is one tourist attraction you’ll want to remember forever!

The Statue of Liberty is known worldwide as a universal symbol of political freedom and democracy. So if you’re feeling a little bogged down by the chaos in the world today, why not book yourself a New York car rental and visit Lady Liberty? The Statue of Liberty is bound to leave you awestruck and with a sense of peace. It’s well worth the drive in your New York rental car, so hop in!

The Statue of Liberty is a monumental work of art open from 8:30am until 5:00pm, everyday of the year except for December 25th. But for those of you who think that visiting the Statue of Liberty is constituted by looking at a big piece of stone have it all wrong! Visitors will get to take part in a special insider’s view of the impressive engineering designs that makes Lady Liberty so marvelous. Visitors are able to actually view inside the Statue through a large glass ceiling which is enhanced by a high powered lighting system. Guided tours are provided by trained, informative park rangers who are there to answer your questions and provide you with informative information.

Tickets are available for tours of the Statue of Liberty, but only a limited amount can be sold per day. Monument tickets are available from the ferry ticket office in both New Jersey and New York. For more information feel free to call 1-866-STATUE4 (in the U.S.) or (212) 269-5755. There is also a website that you can visit at www.statuereservations.com.

So during your next New York Vacation be sure to pack a cooler in your New York car rentals trunk with a picnic lunch, because the Statue of Liberty is definitely worth a full day of exploration!